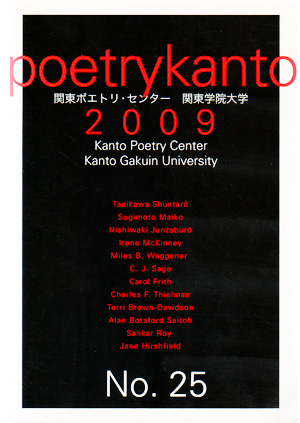 
This year Poetry Kanto celebrates its 25th year of publication. Its first 20 years, under the stewardship of founding editors William I. Elliott & Shuntaro Tanikawa, Poetry Kanto established itself as a vital part of Japan’s poetry scene, providing a showcase for internationally acclaimed poets from Japan and overseas. We hope readers would agree that the past five years has seen a maintaining of those standards not only by introducing poets from English-speaking nations such as Wales, New Zealand, South Africa and Hong Kong but also by broadening our venue to include emerging poets.

Meanwhile, the increase of the ranks of translators working to bring to light modern and contemporary Japanese poetries (beyond traditional verse-forms of haiku, tanka & renga) has continued apace. Contributing to recent issues of Poetry Kanto have been U.S.-based translators Sato Hiroaki, Takako Lento, Jeffrey Angles, and Marianne Tarcov, as well as Japan-based translators Kawamura Kazuo and William I. Elliott, Oketani Shogo and Leza Lowitz, Mitsuko Ohno and Beverly Curran, Tomiyama Hidetoshi and Michael Pronko, and Leith Morton, not to mention the newest U.S.-based contributor for this issue, Hosea Hirata, to all of whom we owe a debt of gratitude. Their efforts to express in English –as close to a ‘universal language’ as exists now–Japan’s unique modern and contemporary poetries play an important role, we believe, in finding creative new ways and artistic forms that explore what it means to meet the challenges of living humanely, non-violently, and responsibly in the ‘globalizing’ 21st century. The work of all Poetry Kanto’s contributors past, present and future can serve to remind readers of the world’s rich cultural patrimonies, together with how the poet’s vision is priceless, and how preserving acts of imagination is a trial of humanity.

For our 25th issue, then, Poetry Kanto offers a dazzling and diverse array of voices. Every necessary poem ever written, it seems to us, begs the question, Why poetry? And every such poem as found, we believe, in the following pages, can in myriad ways hint at a perennial answer.