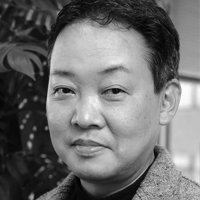 The tanka poet Ishii Tatsuhiko (b. 1952) believes that each of the syllabic units, 5 and 7, that make up the 5-7-5-7-7-syllable tanka form is comparable to a trochee, that therefore the tanka can only be written in one line, and that tanka make proper sense only as a sequence. He makes this argument in Gendaishi to shite no tanka (Tanka as Modern Poetry, Shoshi Yamada, 1999), a splendiferous book that presents his case for “the oldest poetic form in continuous use” through a demonstration of his close understandings of a dozen artistic fields. He also stands out in his deployment of interlinear spaces, punctuation, and a variety of symbols in flamboyant fashion, often incorporating into his pieces phrases from poems and such in foreign languages verbatim.