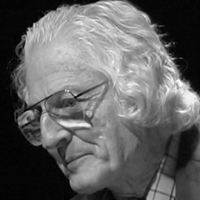 Morgan Gibson has taught a Poetry Writing class in North Hollywood since late 2012. He taught for a total of twenty years in Japan–at Osaka University, Japan Women’s University, Chukyo University, the University of Chicago adjunct to Nichibei Kaiwa Gakuin, Kanda University of International Studies, and Shobi University. In the United States he taught at Goddard, Knox and Shimer Colleges, at the University of Wisconsin—Milwaukee (eleven years), Wayne State and Penn State Universities, and the Universities of  Illinois and Iowa, where he received an M. A. and Ph. D. in Creative Writing and Modern Literature. His books of poetry are Our Bedroom’s Underground (1963), Mayors of Marble, The Great Brook Book, Speaking of Light, Nonzen Poems, and Lusterless Wanderer (2012). His award-winning (but now out-of-print) study Revolutionary Rexroth: Poet of East-West Wisdom has been posted online by the Bureau of Public Secrets. Some of his essays have been collected in Among Buddhas in Japan and Tantric Poetry of Kûkai (Kôbô Daishi) Japan’s Buddhist Saint. His play Madam CIA was enacted on university campuses by The Demilitarized Zone and published. Many more have been in Kyoto Journal, where he was a Contributing Editor and a columnist. His wife, Keiko Matsui Gibson, is a professor, a bioethics researcher, and writer at Kanda University of International Studies. Their 26 year old son Christopher is a graduate of Yokohama International School and Yale College (BA 2013), and the founder of The Morgan Gibson Academy, a school in Tokyo for Japanese students who intend to apply in English to universities abroad.