Gray-Street have co-edited the new “The Ecopoetry Anthology.” 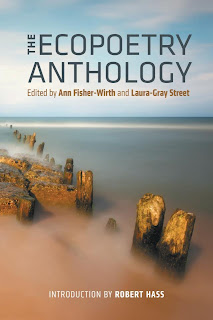 1960, however, public attention increasingly turned to the

reflect this concern. In recent decades, the term “ecopoetry”

shaped by and responds specifically to that crisis. The term

has no precise definition and rather fluid boundaries, but some

things can usefully be said about it. Generally, this poetry

addresses contemporary problems and issues in ways that are

ecocentric and that respect the integrity of the other-than-human

world. It challenges the belief that we are meant to have

dominion over nature and is skeptical of a hyperrationality that

would separate mind from body–and earth and its creatures

from human beings–and that would give preeminence to

fantasies of control. Some of it is based in the conviction that

are at one with the more-than-human world.

They group the book’s generous contents into three categories–nature

are intended, the editors say, as a starting point or as a nexus of

interactions that constitute an ecopoetry which allows for capacities,

they argue, of “contemplation, activism, and self-reflexivity.”

pages long, beginning with Whitman and on to modernists like

Stevens, Pound, Eliot, Crane and Hughes– to the contemporary,

Ammons to Robert Wrigley. Variety is the keyword here, as well as

excellence as a standard applied to the poems they have selected.

Which makes this anthology a pleasure to engage with.

“The Ecopoetry Anthology,” with an introduction by Robert Hass, is