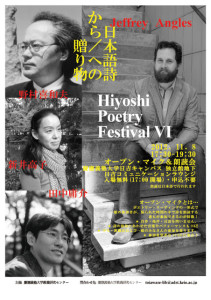 wonderful poet, along with acclaimed poets Nomura Kiwao and


[This year's Japan Writers Conference is scheduled for November

The Sixth Annual Japan Writers Conference will be in Kyoto this year at the Iwadegawa campus of Doshisha Women’s University.

As always, there will be a lot to learn, a lot to talk about, and a lot to take home. Do you wonder what can Facebook and other social media can do for your writing career? Two presentations will look at this issue, along with another on getting a film option for your novel. There will be  presentations on writing for children and young adults, along with a SCBWI gathering. Writing about the military, about Japan, sessions on traditional Japanese form and genre, editing, translation, and two publishing markets actively seeking your work are all part of the program, too. Presenters and participants will come from all over Japan, as well as from Canada, Australia, and Hong Kong. As in the past, this will be this will be a full and lively weekend.

Thanks to all those who submitted poems this year, and to the

featuring two translators, David Sulz and Hart Larrabee, on their

makezu”, about which this blog posted previously:

David Sulz: I love the human vs. nature struggle. It is not about defeating nature, or escaping into your basement/car/office/mall, or coming up with technology make yourself immune to nature. It’s about accepting nature, dealing with nature on its own turf,  and becoming mentally strong enough to not only endure but also enjoy it. Maybe this poem has influenced me embrace winter in one of the coldest winter cities on earth, Edmonton, where walking to work in -40 degrees or playing hockey outdoors or cross-country skiing is even more satisfying an achievement than in warmer climes.

I also like the idea that one can be both humble and strong at the same time. Humility isn’t weakness and strength isn’t aggression. A satisfied and good person doesn’t have to be ostentatious with big houses and fancy meals. Courage also comes from small acts that seem easy on paper but are difficult in real-life such as convincing people to stop quarrelling or helping someone with a heavy load when lots of other people are watching.

Finally, I appreciate the last line—“this is my goal, the person I strive to become.” Miyazawa is not telling anyone else how to act or be except by his own example—which is very Buddhist, I think. He is saying, here’s what I think it takes to be human, I’m going to try to achieve it, you can try too if you’d like but you don’t have to.

Hart Larrabee: On its own, I like it as a spare and deeply personal meditation on right living. As a phenomenon, I am fascinated by the way it has been employed post-3/11 to convey a kind of stoic resolve in the face of tragedy. I can’t help but wonder if Satoh’s use of the poem on Nihongo de asobo—recitations of the poem in regional dialects from around Japan are one of my favorite parts of the show—helped lay the groundwork for the poem’s resurgence.”

To read the entire interview, and see both their translations, click here.

“Oh, where have you been, my blue-eyed son?

And where have you been my darling young one?”

“I’ve stumbled on the side of twelve misty mountains

I’ve stepped in the middle of seven sad forests

I’ve been out in front of a dozen dead oceans”

“Oh, what did you see, my blue eyed son?

And what did you see, my darling young one?”

“I saw a newborn baby with wild wolves all around it

I saw a highway of diamonds with nobody on it

I saw a black branch with blood that kept drippin’

“I saw a white ladder all covered with water

I saw ten thousand talkers whose tongues were all broken

“And what did you hear, my blue-eyed son?

And what did you hear, my darling young one?”

“I heard the sound of a thunder, it roared out a warnin’

I heard one hundred drummers whose hands were a-blazin’

I heard ten thousand whisperin’ and nobody listenin’”

“I heard one person starve, I heard many people laughin’

Heard the song of a poet who died in the gutter

“Oh, what did you meet my blue-eyed son?

And who did you meet, my darling young one?”

“I met a young child beside a dead pony

I met a white man who walked a black dog

I met a young woman whose body was burning

I met a young girl, she gave me a rainbow”

“I met one man who was wounded in love

I met another man who was wounded in hatred

“And what’ll you do now, my blue-eyed son?

And what’ll you do now, my darling young one?”

I’ll walk to the depths of the deepest dark forest

Where the people are many and their hands are all empty

Where the pellets of poison are flooding their waters”

“Where the home in the valley meets the damp dirty prison

And the executioner’s face is always well hidden

Where hunger is ugly, where the souls are forgotten

Where black is the color, where none is the number”

And reflect from the mountain so all souls can see it

And I’ll stand on the ocean until I start sinkin’

But I’ll know my song well before I start singin’

black notebook in one of the poet’s trunks”), with the lyrics in the

not losing to the rain

not losing to the wind

not losing to the snow nor to summer’s heat

with a strong body

miso and some vegetables to eat

count yourself last and put others before you

watching and listening, and understanding

being in a little thatched hut

if there is a sick child to the east

going and nursing over them

if there is a tired mother to the west

going and shouldering her sheaf of rice

if there is someone near death to the south

going and saying there’s no need to be afraid

if there is a quarrel or a lawsuit to the north

telling them to leave off with such waste

when the summer’s cold, wandering upset

called a nobody by everyone

I want to become

casing some of the outstanding poets writing and publishing in Japan today. A link to the column is here. The introduction

to the column is posted below.]

In contrast to the angst-ridden, gloomy post-war Japanese poetry as exemplified by the leading Arechi (Wasteland) poets Tamura Ryuichi, Ayukawa Nobuo and Kitamura Taro, Tanikawa Shuntaro’s poetry carved a new path and became known for its musicality, its pop culture references, its detachment and, not least, its buoyancy. (For a culture as group-oriented as Japan’s, it is noteworthy that his 2011 retrospective poetry collection in English is titled “The Art of Being Alone” (Cornell East Asian Series)). He writes a kind of ephemeral autobiographical verse with a rhythmic exploration of its sources in jazz music, comics, modern painting, etc. His is not an intellectual but a post-modern voice both shamelessly child-like and ruthlessly detached. There’s an androgyny to his voice seldom found to this extent in the West.

In the hyper-rational culture of the West there exists the mind-set where in order to speak one has to “break” the silence and where distinctions in language are made, it often seems, at the exclusion, even obliteration, of what lies beyond. In the more traditional East, on the other hand—as in the modern Japanese lyric– the act of speaking preserves, or honors, silence as its root. Or in Sugimoto Maiko’s words, “Poetry is a thing that emerges upwards out of silence.”

What Japan’s modern lyric poets offer is more than a critique of modernity—they embody the effort to think outside modernity. If the ethics or essence of Japan is as “a non-accountability organism”, according to contemporary artist/blogger Hikosaka Naoyoshi, and if it is true, as he says, that “power structures of Japan have a sweetness and looseness, with roots in primitive cultures, not in civilization as in China or the West” [unofficial translation], then its poets and artists contemplate the root-world, the non-West world in such a way as to authenticate the reality of the tree in its wholeness, reminding us how, without its unseen roots, the tree falls.

The issue we are all facing– what I would call ‘The West Issue’– is critically a male and female issue. Artists and poets have the incredible capacity to cultivate the third eye, to see the symmetry of the underground or invisible world, not only History as linear ‘male’ narrative but Time as ‘female’ cycles with sources found in non-Western cultures, tales, songs, lullabies, nursery rhymes, prayers, chants, and so on. If the West is the upper world of the tree, the East is the lower world of the roots: reality and imagination; tangible and intangible; seen world and unseen world. To balance these forces in a give and take is what true and enduring art accomplishes.

Offered here, then, by the kind graces of Connotation Press: An Online Artifact, is a sampling from the wide spectrum of voices in contemporary Japanese poetry, including Tanikawa Shuntaro, Abe Hinako, Nomura Kiwao,  Tanaka Yosuke, Takahashi Mutsuo, Toshiko Hirata, and Yotsumoto Yasuhiro, along with younger female poets who have come into prominence such as Minashita Kiriu, Hachikai Mimi and Sugimoto Maiko. Allow me to thank all the poets for their permission to feature their poems in this column, as well as to acknowledge the generous efforts of the translators whose contributions (poetry translations, essay, interview and commentary) have been assembled here–they each cannot be thanked enough.

Alan Botsford has published two poetry collections, as well as the hybrid essay-dialogue-poetry collection Walt Whitman of Cosmic Folklore (2010). He is Associate Professor of American Literature at Kanto Gakuin University and serves as editor of Poetry Kanto, an annual bi-lingual journal concerned with the interplay of voices East, West, and beyond.

Translator, poet, and visiting professor at Tokyo University is giving a talk/poetry reading with the poet Yosuke Tanaka and Emiko Miyashita about translation and contemporary poetry on 2/13 (Sun)

YOMIMONO articles about, in The Japan Times & Koe Magazine: