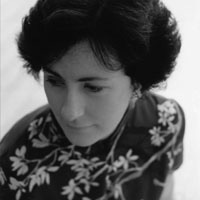 Gwyneth Lewis has published six books of poetry in Welsh and English. Her first collection in English, Parables & Faxes (Bloodaxe, 1995) won the Adelburgh Poetry Festival Prize and was shortlisted for the Forward, as was her second, Zero Gravity (Bloodaxe, 1998). Y Llofrudd laith (‘The Language Murderer’, Barddas, 2000), won the Welsh Arts Council Book of the Year Prize. Her first prose book was Sunbathing in the Rain: A Cheerful Book on Depression (Flamingo 2002), which was shortlisted for the Mind Book of the Year. Two in a Boat, her second prose book, about a sea voyage, was published in April 2005 by Fourth Estate. Gwyneth was recently named as one of the Poetry Book Society’s Next Generation of poets, as well as the first ever National Poet (or Poet Laureate) of Wales.