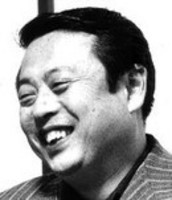 Kawasaki Hiroshi (1930-2004) Born in Tokyo in 1930, he lived until his death in 2004 in Yokoskua. In 1953 he started the poetry journal 『櫂』(Oars) with Ibaragi Noriko, Tanikawa Shuntarô, Ooka Makoto and others. His first book of poems A Swan was published in 1955. Its title poem “A Swan “ written all in hiragana was first read in the opening summer seminar of Kanto Poetry Center in 1968. Ooka once said that the group of poets who appeared in 1950’s such as Kawasaki and Ibaragi played a historically important role of making the poetic sensibility itself the chief theme of poetry. He was awarded the Takami Jun Prize by Empty Can of Biscuits in 1987. He traveled all over Japan doing  field work on dialects.

Translated by William I. Elliott and Kawamura Kazuo.