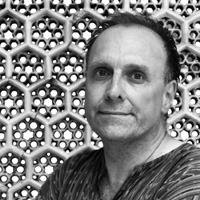 Bill Wolak is a poet whose work has appeared in such literary magazines as Shantih, Androgyne, Nexus, California Quarterly, Alchemy, Le Crecelle Noire, Ignite, Third Wednesday, Caveat Lector, Trajectory, South Jersey Underground, and Timber Creek Review. He has published one collection of poetry, Pale As An Explosion, and has two forthcoming books, Archeology of Light, and Love Emergencies (with Mahmood Karimi Hakak). He has translated Joyce Mansour, Stuart Merrill, and Francis Vielé-Griffin. His most recent translation,Your Lover’s Beloved: Fifty-one Ghazals of Hafez with Mahmood Karimi-Hakak was published by Cross-Cultural Communications in 2009. His translations have appeared in such magazines as The Sufi Journal, Basalt, Persian Heritage Magazine,The Dirty Goat, Beacons, and Fellowship Magazine. His critical work and interviews have appeared in Notre Dame Review, Persian Heritage Magazine, Southern Humanities Review, The Paterson Literary Review, Ascent, and Beatlick Magazine. Mr. Wolak has been awarded several National Endowment for the Humanities scholarships and two Fulbright-Hays scholarships to study and travel in India. Mr. Wolak has traveled throughout Asia including trips to Tibet, Nepal, Thailand, Japan, and China. In 2007, he was selected to participate in a Friendship Delegation to Iran sponsored by the Fellowship Of Reconciliation, the nation’s largest and oldest interfaith peace and justice organization. The Friendship Delegation spent twelve days in Iran from February 28 until March 13 and visited four cities: Tehran, Qum, Esfehan, and Shiraz. During the Summer of 2010, Mr. Wolak was awarded a Field Study Opportunity in China and Japan by the National Consortium for Teaching About Asia from June 28 to July 19, spending nine days in each country with the following itinerary: in China he will visit Beijing, Shanghai, and Suzhou, and in Japan, Tokyo, Nara, Kyoto, and Hiroshima. Mr. Wolak has been an adjunct professor in the English Department at William Paterson University for over twenty years.