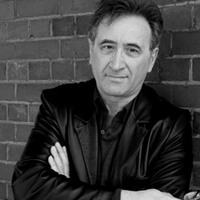 George Szirtes’s first book, The Slant Door (1979) was joint winner of the Faber Memorial Prize. In 2004 he won the T S Eliot Prize for Reel, and was shortlisted for the prize again in 2009 for The Burning of the Books and for Bad Machine (2013) is similarly shortlisted. There were a number of other awards between. Bloodaxe published his New and Collected Poems in 2008) His translations  from Hungarian have won international prizes, including the Best Tranaslated Book Award in the USA for László Krasznahorkai’s Satantango (2013) and his latest book for children, In the Land of the Giants won the CLPE Prize for best collection of poetry for children in 2013.