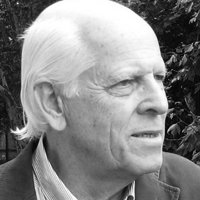 Hans Brinckmann, was born in The Hague. Fresh out of high school, he joined the Far Eastern staff training program of a Dutch international bank. A year later he was assigned to Japan, where he worked for the next twenty-four years. In the late 1950s he was part of a Bohemian circle of artists and poets in Kyoto, and published and edited New Japan Pebbles, the English version of Juen Shishu, a small magazine devoted to amateur poetry.

After retiring from banking in 1988, he lived in London, Amsterdam and Sydney, and – since 2003 – again in Japan. His publications include a highly-acclaimed memoir, The Magatama Doodle (Global Oriental, 2005); two collections of short stories, Noon Elusive (H2H/Trafford, 2006) and The Tomb in the Kyoto Hills (Strategic, 2011); a book of history, Showa Japan, the Post-War Golden Age and its Troubled Legacy (Tuttle, 2008); and The Undying Day (H2H/Trafford, 2011), a bilingual (English-Japanese) collection of poetry, from which he has given readings in Tokyo, London and Amsterdam, together with his translator, Hiromi Mizoguchi. His first novel, In the Eyes of the Son, is due out in 2014. URL: www.habri.jp and www.habri.co.uk

Hiromi Mizoguchi, born in Tokyo, obtained an MA from the Graduate School of Social and Cultural Studies, Kyushu University. She met Hans Brinckmann through the Japan Society in London while living there from 1999 to 2001. Her translation work includes Magatama-moyou no Rakugaki (2005, Shinpusha), the Japanese version of Brinckmann’s The Magatama Doodle; Aru Oranda-jin no Showa Japan ron (2009, Random House Kodansha), the Japanese adaptation of his “Showa Japan”; and Owaranai Ichinichi, the Japanese title of the bilingual poetry collection,The Undying Day.