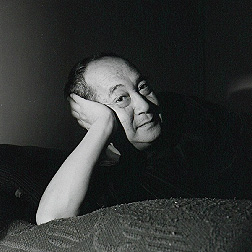 Kitamura Taro (1922-1992), among Japan’s well-known postwar poets, yet too long underrepresented in English translation, was born in Tokyo in 1922 as Matsumura Fumio. He took the pen name Kitamura Taro, and, in 1951 he joined Ayukawa Nobuo and Tamura Ryuichi in founding the poetry group Arechi (Wasteland). Kitamura frequently wrote of the port city of Yokohama, of which he was very fond. He died in 1992, at sixty-nine.

(Translated by poet, editor, and translator William I. Elliott –whose Selected Poems is due to appear in 2006– and translator and Shelly scholar Kawamura Kazuo.)


All poems by Kitamura Taro. Translated by William I. Elliott and Kawamura Kazuo.