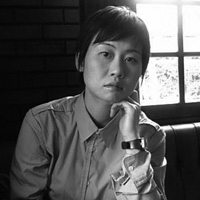 As she comments in the poem “Life History” included in this issue of Poetry Kanto, the poet Minashita Kiriu was born in Kanagawa Prefecture in 1970.  Although she has only been publishing for several years, she has quickly risen to become one of the foremost Japanese poets of the first decade of the twenty-first century, thanks in part to winning the Gendai shi techō Prize in 2003.  These poems are from her first book of poetry, Onsoku heiwa (Sonic Peace), which won the Nakahara Chuya Prize in 2006.  She teaches sociology, public policy, philosophy, and literature at several universities in Tokyo.

Translator Jeffrey Angles is an assistant professor at Western Michigan University, where he teaches Japanese literature and directs the Japanese language program.